Coming into the 3rd quarter of 2019, our Malaysians on Malaysia study is set to understand the trends and general Malaysian sentiments that have happened thus far in 2019.

Although it continues to retain a high score, the confidence index of Malaysians in this quarter has recorded an overall contraction. Generally, this is reflected in consumer sentiments across all indicators.

Malaysians seem to be slightly concerned about their current financial well-being, as seen in their decline in index scores. However, they remain hopeful for the upcoming year.

The confidence levels amongst Malaysians see correction during this period, especially compared to the high of 2Q2018. With the continuous effects of the US-China trade war and the perpetual global uncertainty, Malaysia will have to rely strongly on the prosperity of its domestic market to ensure that economic growth continues.

Malaysians on Malaysia 3Q2019 from Oppotus

If you like to dig deeper into the numbers, please do reach out to us on theteam@oppotus.com 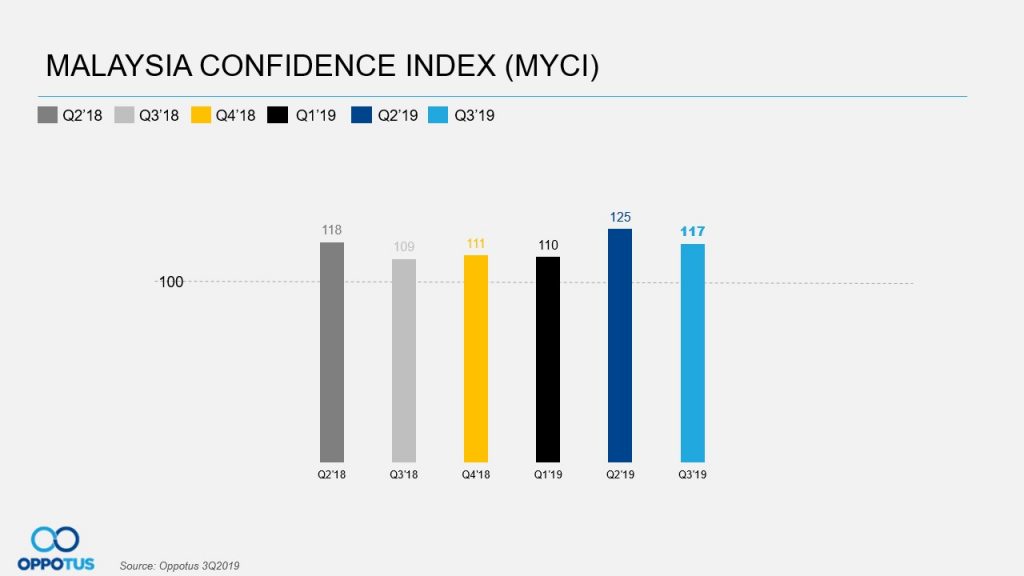 In 2Q2019, it was recorded that Malaysia’s economy expanded by 4.9% year-on-year, but despite that, the overall Malaysia Confidence Index has declined slightly from last quarter​, now sitting at 117 in 3Q2019 compared to 125 during 2Q2019. However, this still remains higher than it was in the 3 quarters prior to 2Q2019.

The lack of confidence in the country’s current economic state (where the index is recorded at its lowest – below the 100 point mark) contributes significantly to the overall MYCI. Taking a look at the current economic climate, we see many factors which would have greatly impacted consumer confidence – such as the US – China trade war, uncertainty within the global financial market and volatility of the Ringgit. ​All-in-all, Malaysian sentiments seem relatively optimistic, as their overall confidence index remains strong – 17pts above the 100-point threshold.​ 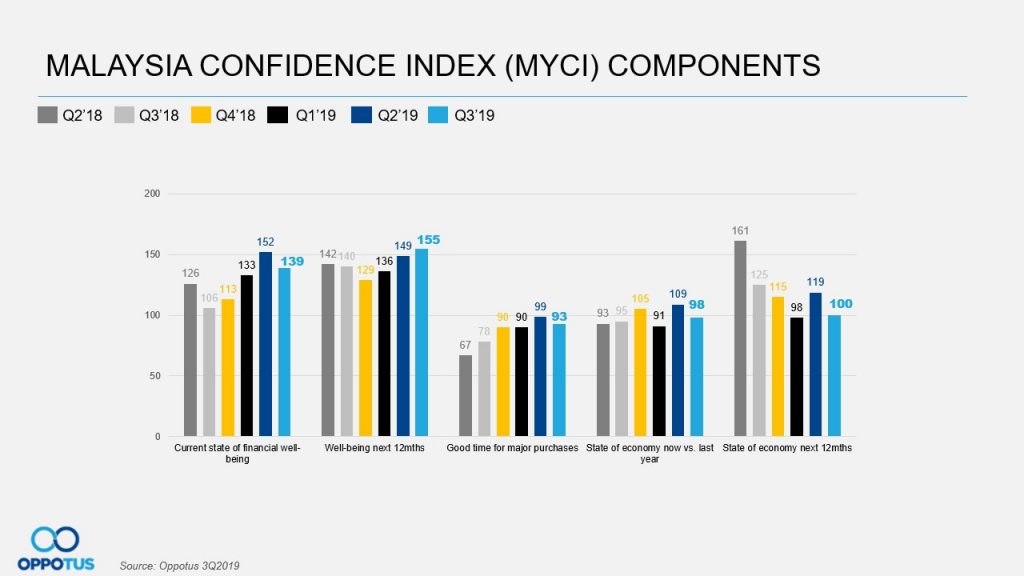 Taking a closer look at the components of the MYCI, the decline in optimism in our current economic state is reflected in the drop in confidence in the state of the economy over the next 12 months.​

In line with global economic conditions, consumers are also less optimistic in regards to their current financial well-being (a drop of 13 points is seen in the index score) compared to 2Q2019, where Malaysians were at their most confident.​

Notably, consumers’ confidence for major purchases sees its first dip since Q2 last year. Despite all this, consumers still seem relatively positive that the country’s economy will soon pick up.​ 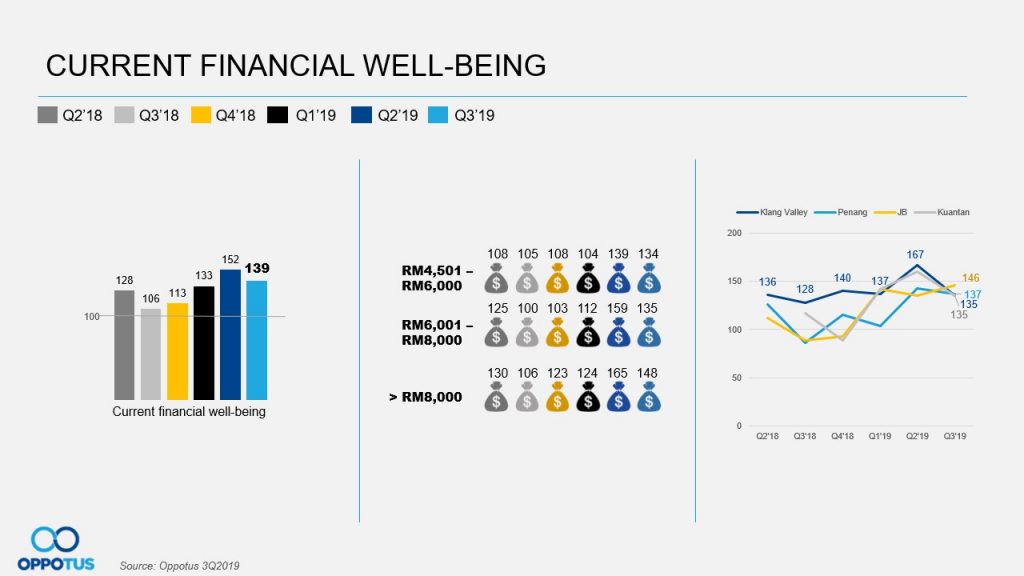 Although the confidence index for consumer’s current financial well-being has dropped since last quarter, the score remains high suggesting that Malaysians at large are still quite comfortable with where they are.​

This slight decline in the confidence index is represented amongst all income brackets, with the biggest contraction coming from the higher income groups. ​ 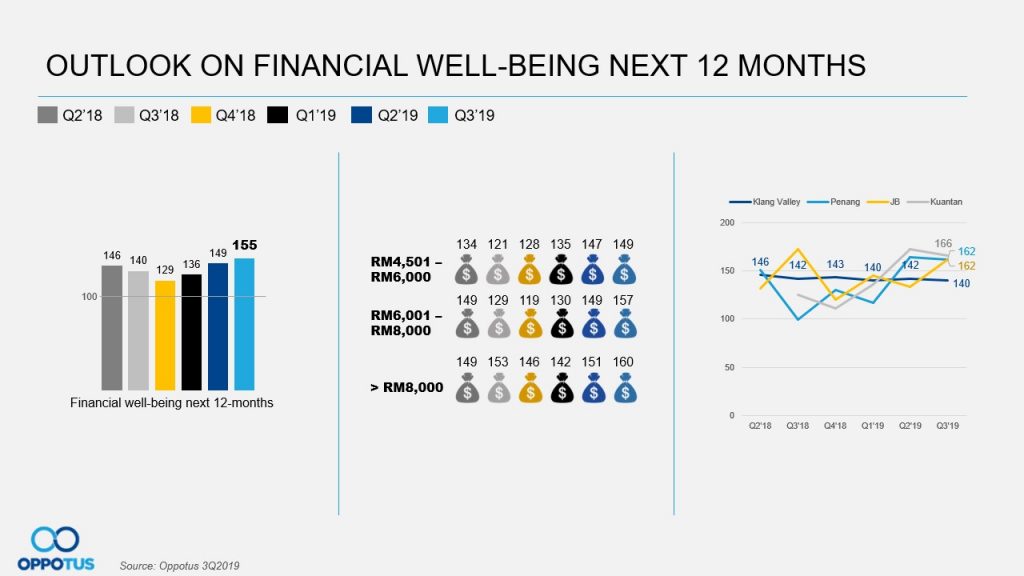 Despite the decline in index scores for Malaysian’s current financial well-being, consumers remain hopeful that their financial welfare will see improvements in the upcoming months.​

Kuantan still remains the most optimistic region with Penang and Johor Bahru trailing behind. The East Coast Economic Region (ECER) has been a major boost to Pahang’s economy and has also introduced new jobs opportunities, resulting in a high confidence level coming from the belief that they will be potentially better off in the coming months.​ 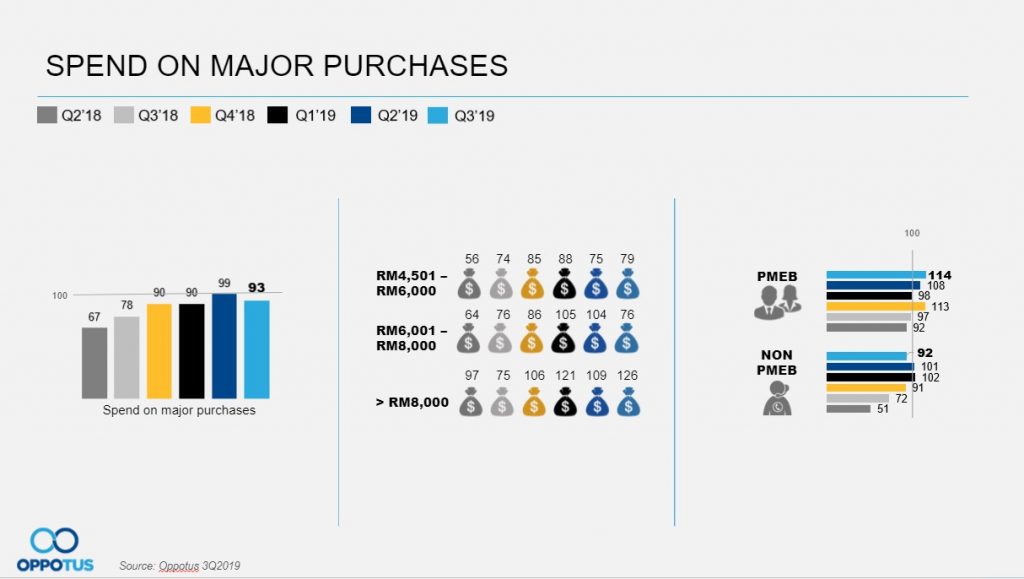 Looking into spending on major purchases, the index score has seen a dip, for the first time since 2Q2018. This indicates that consumers are being more wary when it comes to spending, which is in line with the current economic and fiscal outlook.

Given our current gradual increase in inflation and the high cost of living which continues to grow; this trend is negatively affecting those in the low-mid income groups more, compared to the higher income groups who continue to be confident with their spending.

This has also affected the Non PMEB’s willingness to purchase, with their spending on major purchases dropping below the 100-point mark for the first time this year.​ 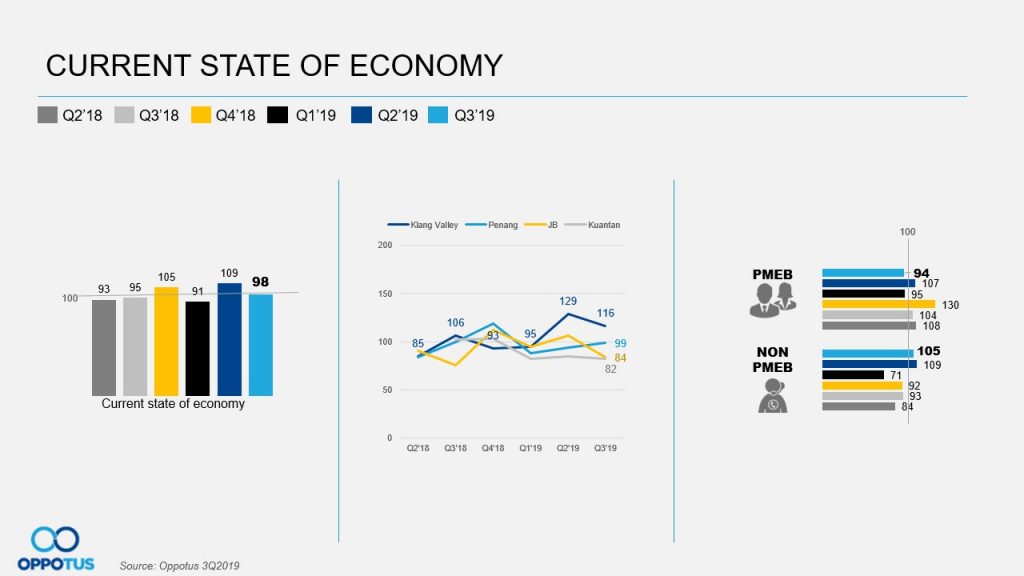 There has always been slight fluctuations in confidence with regards to the country’s current economic state. In 3Q2019, a decline of 11-pts has caused the index scores to slump below the 100-point mark.​

Despite the overall decline, consumers in the Klang Valley remain confident with the current state of the economy. Sentiments remain positive given the various mega projects such as LRT 3, MRT 2 and Klang Double Track Phase 2.​

A slight decline is seen from both PMEB and Non-PMEBs, with the PMEB’s confidence dropping below 100-points.​ 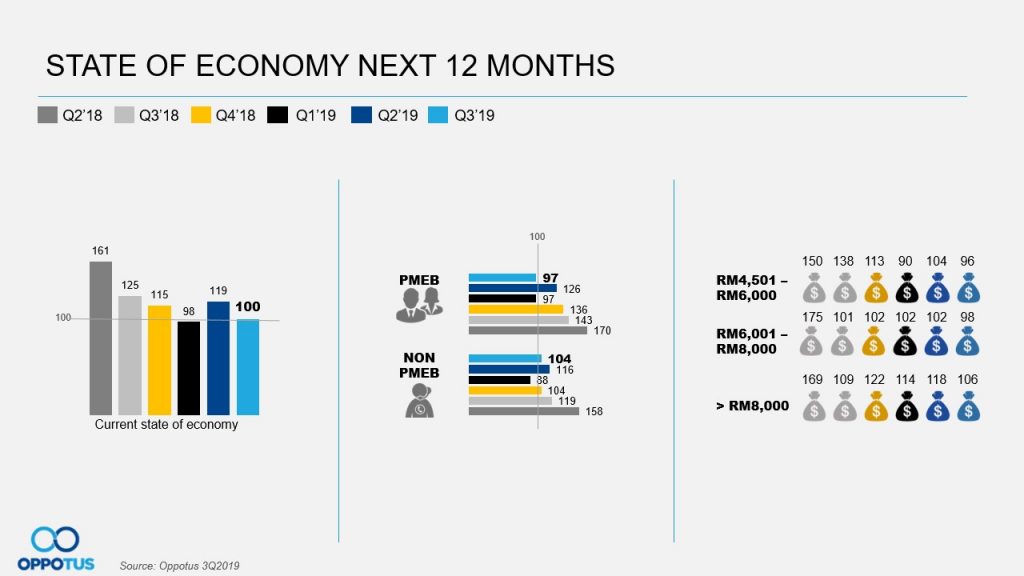 Compared to the last quarter, Malaysian sentiments now seem to look less optimistic about the state of the economy in the coming year.

This sentiment is affecting PMEB in particular, where their confidence index is now below 100-points.​

A drop in confidence is also seen across all income groups. This drop is more significant amongst the higher income group, which sees a 12 point drop compared to the 6 point drop for the low-mid income group. 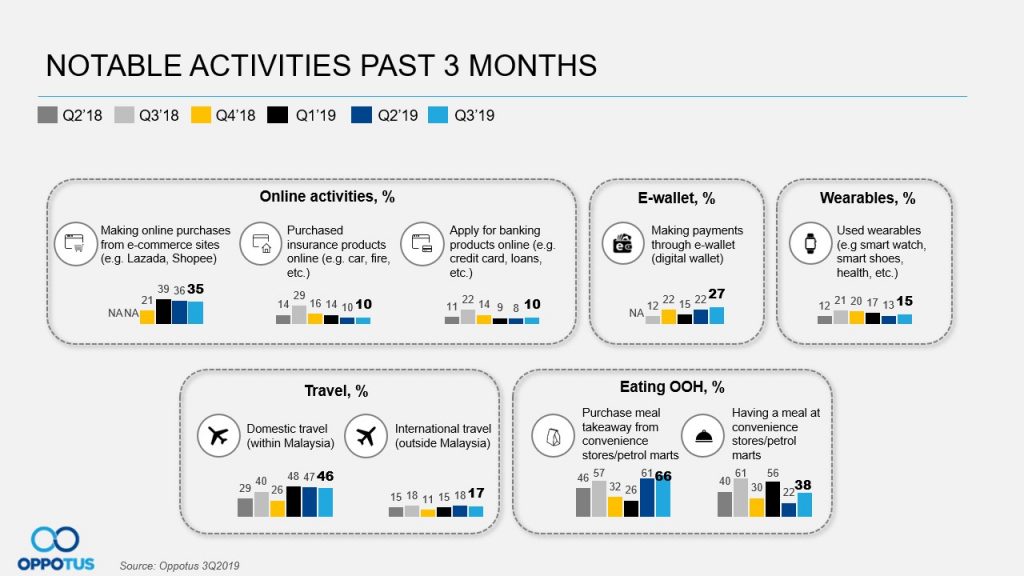 ​Coming to our survey of notable activities for 3Q2019, most of the activities in the list did not record a significant difference between 2Q2019 and 3Q2019.

E-wallets did record a 5% higher usage rate in this quarter, while the consumption of food from convenience stores and petrol marts has increased, with the % of people having purchased meal takeaway from these outlets increasing to 66%, the highest it has been since 2Q2019.

The incidence of having a meal at convenience stores/petrol marts has also increased significantly this quarter after suffering a massive drop between 1Q2019 and 2Q2019.

​With the largest e-commerce festival of the year, 11.11 taking place in 4Q2019, we should expect to see a higher incidence of e-commerce purchases and e-wallet usages in the next report. The interesting question will be how much of an increase will actually be reported, especially since all the major e-commerce platforms such as Shopee and Lazada have reported record breaking numbers for this year’s 11.11 sales. 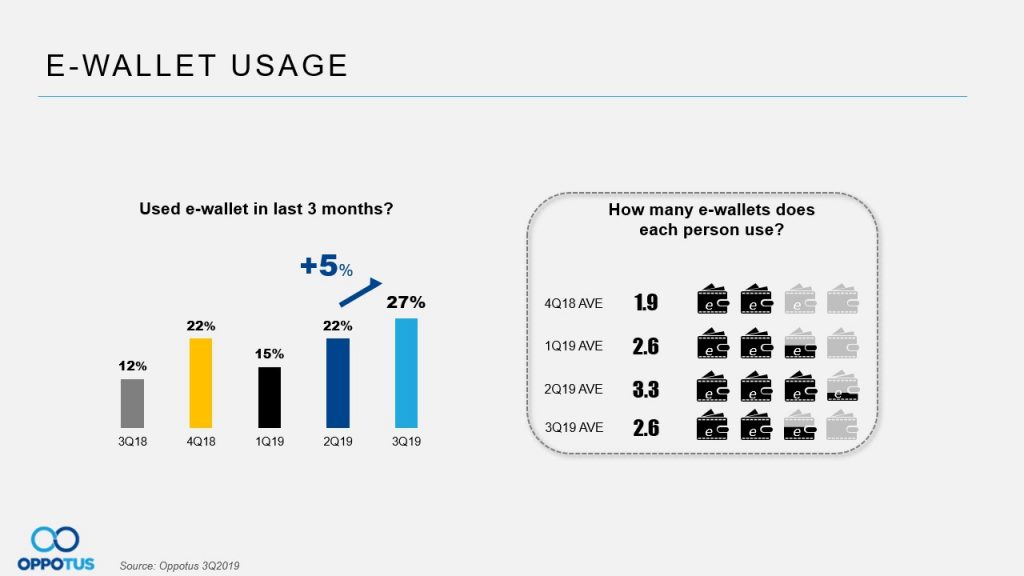 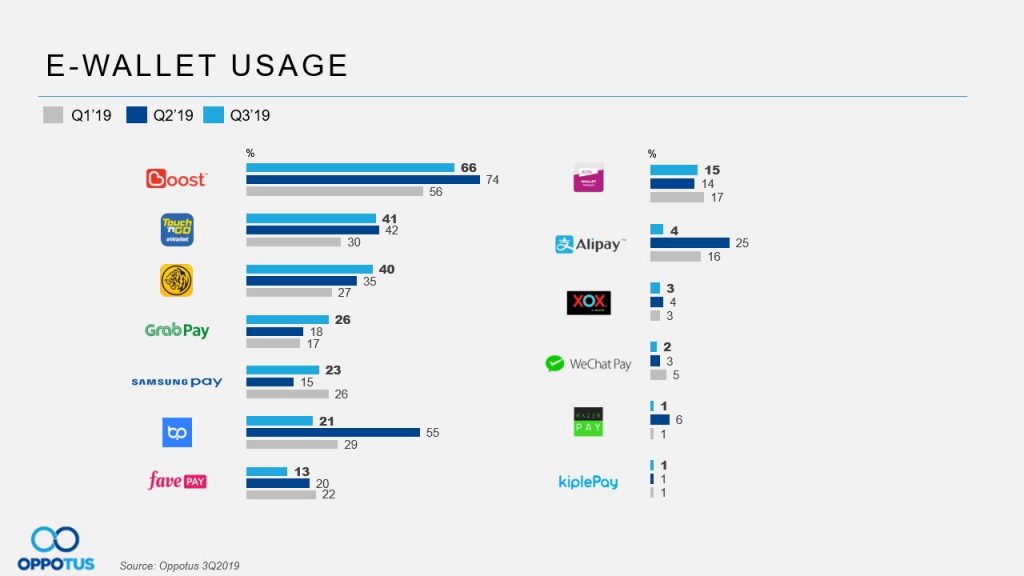 ​Boost, Touch ‘N Go and Maybank QR are the top e-wallets being used​ in 3Q2019, with bigpay sliding in usage.

GrabPay usage has been steadily increasing since 1Q2019. and will continue to grow given their recent recognition in the e-wallet space and possibly with their collaboration with Jom Parking. 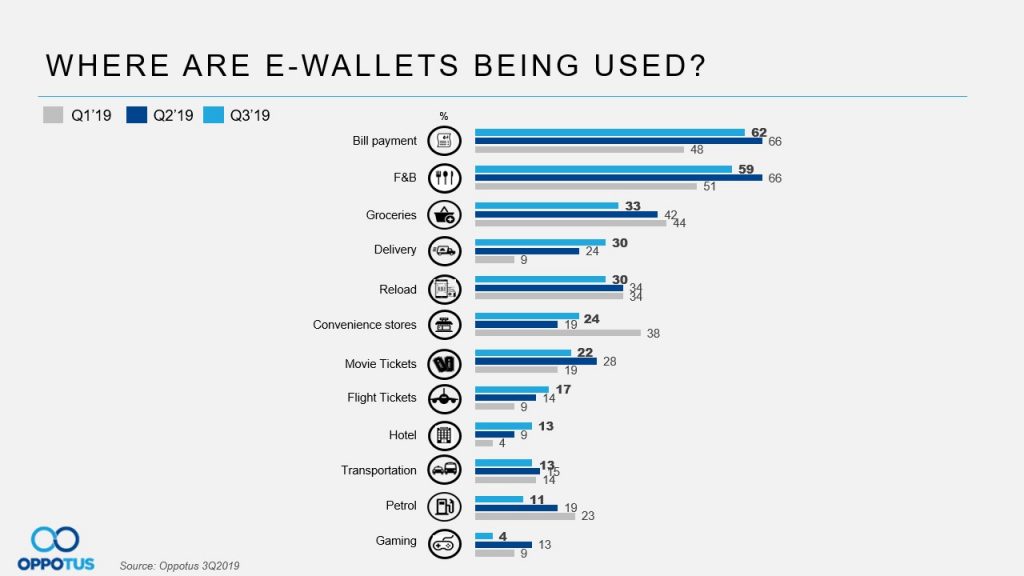 ​F&B and bill payment continue to top the list as the most common use cases for e-wallets in Malaysia.

The usage of e-wallet for food delivery has seen a strong increase, which is understandable given the hazy conditions experienced in Q3. Food delivery services are becoming an increasingly attractive and habitual option for those who prefer to stay indoors, especially when coupled with the never-ending promotions/rewards offered by a wide variety of vendors and food delivery services​. 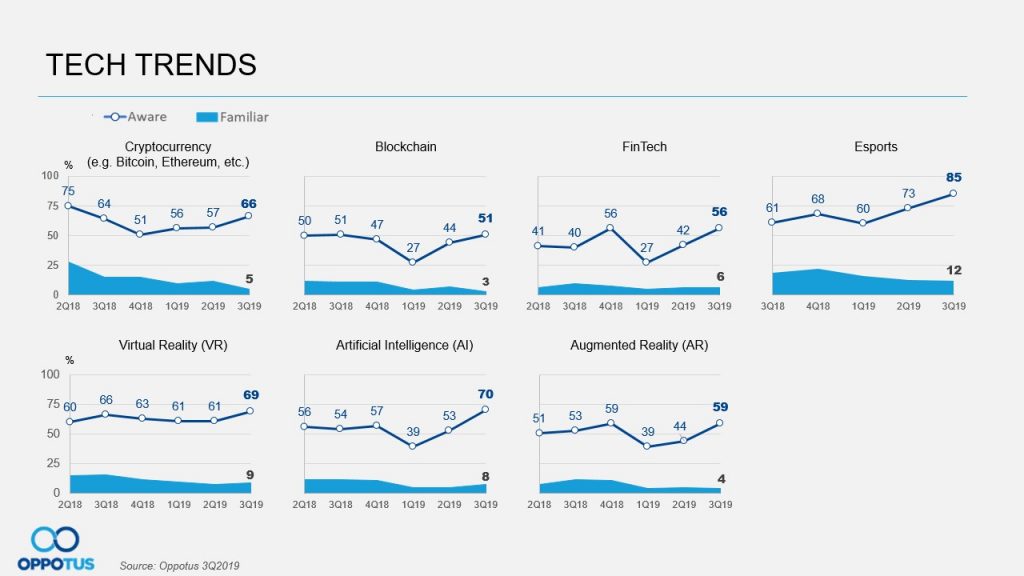 ​As we come to our tech trends of interest, we see that awareness has increased across the board for all of the tech trends included in our survey.

The awareness of AI has increased most significantly, and esports could continue to receive even higher awareness in the following quarter due to the new Strategic Plan for Esports Development that was recently revealed by the Malaysian Ministry of Youth and Sports. Not to mention the 2019 SEA Games are currently ongoing with esports being included as a medal event for the first time in history. 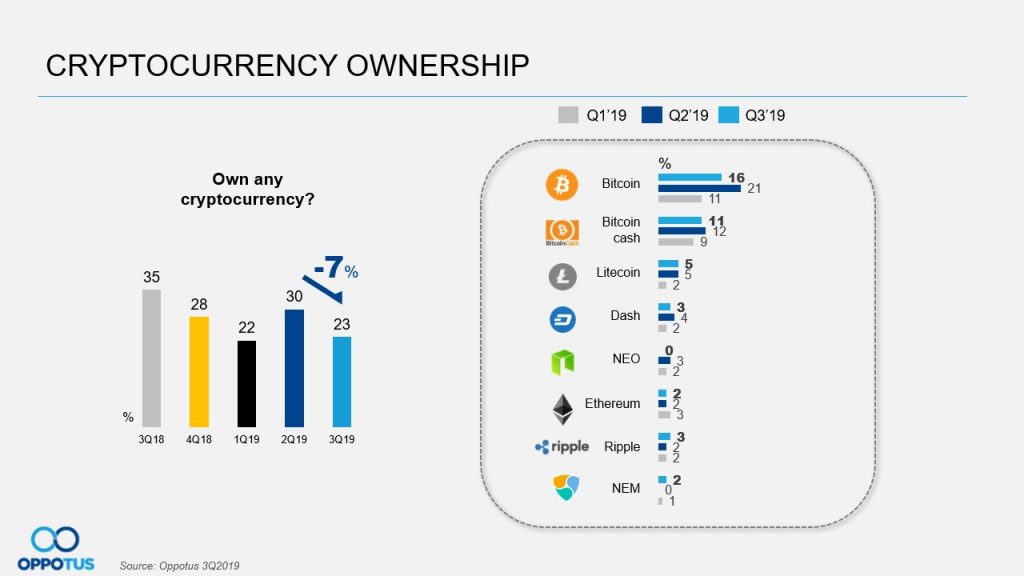 After experiencing a 36% increase between 1Q2019 and 2Q2019, cryptocurrency ownership among Malaysians has now dropped by 7 percentage points. Bitcoin ownership almost doubled from 1Q2019 to 2Q2019, but some Malaysians appear to have decided to cash out on their bitcoin after it’s recovery from US$3,400 at the beginning of the year to almost US$11,000 by the end of 2Q2019. 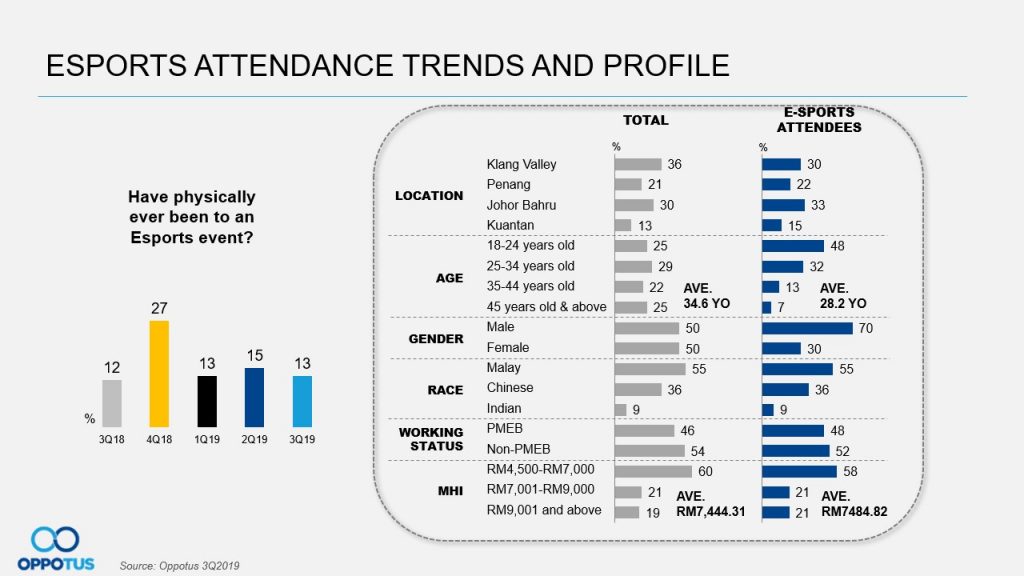 Brands that are looking towards Millennials as a key audience should take heed regarding this upcoming trend.

Today, we already see a wide range of non-endemic brands (i.e. brands not directly related to the gaming eco-system) that are slowly utilising esports as a channel to build relevance and engagement with this very crucial consumer group, yielding very encouraging results.

With the upcoming festive season and some crucial events such as 11.11 and the featuring of esports at the SEA games taking place in 4Q2019, it will be interesting to see how spending behaviour and tech trends ramp amongst Malaysian consumers as we reach the end of the year (decade).

For a closer look at the data, feel free to contact us at theteam@oppotus.com.

: E-wallet, Esports, Malaysians on Malaysia, MOM, MYCI
December 12, 2019Articles, Blog Posts, MYCIjtjswee@gmail.com
Previous Post The Explosive Rise of E-Commerce: Analysing the Consumer Behaviour Behind the Billions of Sales on 11.11 Next Post E-Wallets in Malaysia: Landscape at the end of 2019 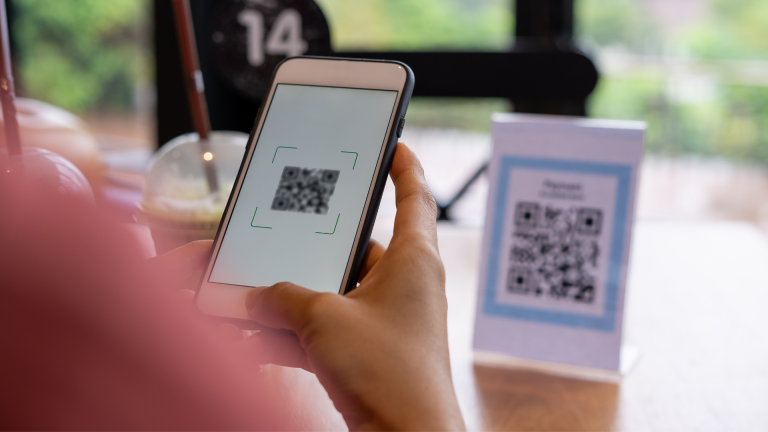 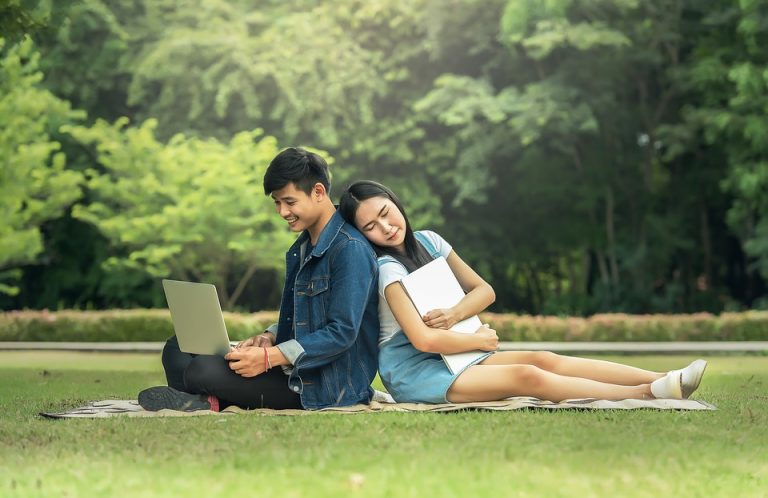